When ludicrousness stops being funny, the Guardian Gaza report.

I thought there is little more to add on the Guardian videos accusing the IDF of war crimes during the Gaza operation, given what has already been written in ZioNation in the Jerusalem Post, by the indispensable Melanie Philips, and more, and more. And more as these lines are been written, but apparently, there is more to add.

In the first video I was struck by the Guardian decision to go to the Israeli website ‘Shavuz’ for technical information about the capabilities of Israel's unmanned drones. Shavuz is Hebrew slang for ‘worn-out’ or overworked. The site serves primarily as a service for soldiers before enlisting and before rejoining civilian life. It gives advice on jobs, and academic courses along with social interactions in forums, exchange of war stories, and other army life experiences. IT IS NOT a supplier of professional information on Israel’s technological capabilities; there are plenty of other sites and publications for that, many of them in English. Using ‘Shavuz’ for information on technology is the equivalent of using the ‘London Employment Help Center’ for information on the electronics of the London Tube. It is simply ludicrous; unfortunately there is nothing here to laugh at.
This (Hebrew) link from ‘Shavuz’ would have given the Guardian part of the answer to their repeated question as to why so many civilians were hurt. In it Israeli pilots recall how Hamas operatives were dressed as women so the Israeli forces won’t fire on them.
This is either bad journalism or selective journalism on behalf of the Guardian.
What the Guardian does give us, unselectively, is an all out pseudo legal assault on our UAVs (unmanned aerial vehicles).
The UAVs are one of the more successful Qassam hunters we’ve got, but contrary to what the Guardian implies, they are not foolproof; no technology is. And the more it is used the more likely it is to go wrong. Missiles can veer off, equipment can wear-down from overuse, and mistaken identification is likely to occur when conditions are not ideal: from the weather or from various structures that are blocking the view. An expert on those technologies can undoubtedly add a few more faults.
Problems exist also in the documented cases of death attributed to the drones. In the first one, members of a large family that was drinking tea in a confined space, closed by walls, were able to see the drone that attacked them as it did so. With their yard wall surrounding much of their view, how could they know for sure it was not a rocket or another projectile fired at the same time the drone was there?
In the other incident, where two young women were supposedly killed by a missile fired from a drone, the eyewitness had shown the reporter a small hole in the ground, supposedly from the missile but with no signs of fire around it. Is that what a missile attack looks like? What has the reporter done in order to find out from professional independent sources what such a missile attack looks like in the first place? Isn’t it puzzling that a killer missile will leave no signs of fire?
The problem in those two accounts is not the credibility of the witnesses but the quality of the Guardian’s research. Indeed the major hole in the Guardian credibility is their opening statement that in 3 weeks they had investigated numerous incidents. Just how much time they gave a single case, a day, an hour, or did they came to Gaza with an army of investigators? That claim is obviously preposterous, but it is a part of a very, vary serious matter.
An ominous question now arises regarding the Guardian's motives in going after a weapon that was able to help keep down the kill rate of the Qassam rockets, thus keeping civilian casualties low.

The second video dealt with the human-shields accusations. Some of the holes in its credibility were picked quickly by previous critiques. The idea that an intact copy of an Israeli journal from 2 years ago recording an earlier arrest of one of the family members testifying in the video, was supposedly forgotten there by Israeli soldiers, is indeed peculiar. A more likely explanation is that the family kept the old copy as a record of their son's ‘resistance’. And another peculiarity, according to the three brothers, the heroes of the second video, the Israeli army first used civilians as human shields, and then sent them into Israel for interrogation. Now, does that make sense? Why put the lives of the detainees at risk if they are needed later for interrogation? And could it be that that line of tanks was just a place to gather the detainees before deciding who will be released and who will be send to Israel for further inquiry? Remember, Gaza is mostly dense urban environment, ideal for guerrillas, where tanks have difficulties in maneuvering, especially as groups. Therefore if this was a line of tanks it had to have been located away from the main fighting. If that was the case, which is most likely given the conditions of fighting in Gaza, then the detainees were where human shields are less needed. Plus, tanks have their own shields.

The video also shows recorded cases of what is supposedly the use of ‘human shields’ by the IDF. This allegation is something, which the Israeli authorities failed to properly address. Most of the pictures failed to show where the threat to the soldiers comes from, and how the civilians in the pictures can become effective shields given the type of threats that can come in those mostly urban environments, and the civilian’s distances from the soldiers.
Most of those pictures come from the time of ‘Operation Defensive Shield’ when the Israeli army began cleaning the West Bank from cells of mass murder organizations. They refer to what was known as ‘neighbor procedure’. This procedure was labeled human shield by various groups, but when studied thoroughly, from Betselem's own accounts, it turns out that these civilians acted as negotiators between the IDF and Palestinian gunmen barricading inside homes. Those were negotiators by force, at gun point, and do carry their own set of moral problems, but at the same time they helped defuse many of those situations, cutting down the number of casualties on both sides. As problematic as the ‘forced negotiators’ cases are, they are not human shields.
One of the accusing pictures continues the Guardian line of preposterousness.

In the picture, which is a part of a bigger scene, a Palestinian detainee is pressed against a cement pillar by a sturdy Israeli soldier.

Now: a common sense question, if a grenade or a Molotov cocktail, were to explode over there, or large number of bullets fired at that direction, who is more likely to get hurt, the detainee, covered by cement on one side and a large soldier on the other? - Or the soldiers in his vicinity?
Another picture carries its own dubious history. It is a part of the Mohammed Badwan Myth using a name that had apparently recurred under similar circumstances in various times and places across the WB, since this picture was taken. 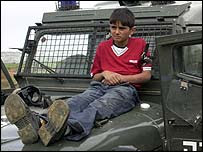 
As for the reporter's claim that no proof has been found of Hamas using human shields, perhaps he should check this BBC story with pictures, that records the use of human shields by Hamas.

The third video accuses Israel of deliberately firing on medical personnel. Here three unmentioned issues meet. One, the claim the IDF gave no explanation as to why medical personnel were fired at is as false as it could possibly get. Throughout the recent Intifada, including ‘Operation Cast Lead’ Israeli officials complained about Palestinian gunmen using medical transport and their personnel to hide weapons and fighters, and that includes during combat situations, about Hamas officials hiding in hospitals and pretending to be doctors, and countless other similar accusations. Second – this is another subject that sheds light on the key differences between a society that gives human lives high priority, Israel, and the one that doesn’t, Hamas. In Israel, bitter experience had thought to keep medical and fire and rescue personnel out of a battle zone until the area is secure. This is why no paramedics or firemen are allowed into burning buses, until the bomb disposal unit makes sure there are no more bombs in the bus. And that is why Palestinian and international medical personnel were kept from attending the wounded of the battle of Jenin, until the Israeli army dismantled all or most boobby-traps there. Third, a means for Palestinian medics to coordinate with the IDF the evacuation of wounded Palestinians had existed during the last Intifada. These were the liaison offices between the Israeli authorities and the PA, but they were cancelled by Hamas. So why did the Israeli army fire on medical personnel? Because it had no means of verifying their identity during on going battles and skirmishes, and they had no means of communicating their problems to us.
All these leave the Guardian report with shaky credibility and the aura of questionable motives.
Posted by Dvar Dea at 12:08 PM