The upcoming “freedom” flotilla to Gaza

Simple (via The Propagandist)

Philosemitism: Germany: passionate about Jew-hate
Posted by Dvar Dea at 9:34 AM No comments:

Email ThisBlogThis!Share to TwitterShare to FacebookShare to Pinterest
Labels: anti-Semitism, create a link

Email ThisBlogThis!Share to TwitterShare to FacebookShare to Pinterest
Labels: create a link, Nakba

Adam Holland: Is Andrew Sullivan the "wicked son"? No.

Adam Holland: Is Andrew Sullivan the "wicked son"? No.
Posted by Dvar Dea at 11:14 PM No comments:

Philosemitism: How did anti-Semitism return to the very nations that pledged never to repeat it?

Philosemitism: How did anti-Semitism return to the very nations that pledged never to repeat it?
Posted by Dvar Dea at 7:05 PM No comments:

Email ThisBlogThis!Share to TwitterShare to FacebookShare to Pinterest
Labels: create a link, divestment

A new Palestinian hate page on facebook (H/T Simon Plosker at HonestReporting) has this photo on. It shows, supposedly an Israeli soldier struggling with a Palestinian child. But a careful examination shows the soldier isn’t fighting, he is too busy carrying a heavy gun. And when we look to the right an adult hand is supporting this child, otherwise he would fall. Now if Israeli soldiers are so dangerous, why Palestinian adults feel confidant enough to throw their kids at them? 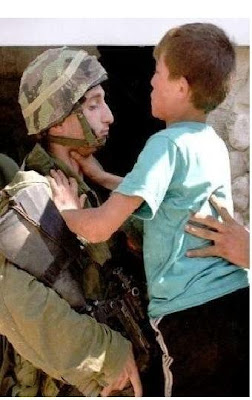 There is more than one story coming out of this picture, non of them favorable to the Palestinian side.

Osama Bin Laden is dead, and that is good, very good, but there are two more monsters remain, his deputy, Ayman Al Zawahiry and the Taliban’s top leader Mullah Omar.

Prior to the killing of Bin Laden a debate took place in MSM as to whether his Al Qaeda had any actual power left following their defeat and that of the Taliban in Afghanistan in 2002. This debate forgot the nature of their appeal in the eyes of their followers and sympathizers. To these crowds, (or sub-culture of Jihadism), these three are regarded as saints, living divine saints. It is difficult to explain this type of sainthood to the modern humanistic mindset. Suffice it to say that it is sainthood gained by bravado. It is bravado that is made from mass killings, and the ability to evade punishment for those crimes. An important and well-known ingredient of this sainthood is the PR campaign. A campaign that is loaded with Islamic motifs that serve as an excuse and glorification of those crimes, incorporated in a ‘come and catch me’ attitude - bravado.


Because of this “sainthood” their death will have a complex effect on the War on Terror, but one that will benefit the fighting democracies.

There are in fact several benefits. The first one comes from the above-mentioned sainthood. This “sainthood” created a situation where every new leader rising through the ranks, like Anwar Al Awalki in Yemen, will be always under their shadow. And this is a discouragement for every glory-seeking leader. (Unless they can get local or regional political power the way Al Awalki did. This is a different incentive, which isn’t necessarily available in every region).

The second benefit is the deterrence that had been achieved as a result of killing all three of them. This deterrence sent a clear and obvious message to all Bin Laden wannabes. If your role models can be caught and killed so can you. The apparent length of this chase enhances that deterrence, because the United States comes out of it as patient, never letting hunter. And that is a third benefit.

Such an achievement means that the soviets came to the graveyard of empires to spread communism and failed. But the Americans came to Afghanistan to catch the people responsible for 9/11 and succeeded. Success is the only good way to leave Afghanistan. It is important to turn that country into a reasonably functioning state. But not at all cost. Simply put: if Afghans won’t fight for Afghanistan, no one else should. Some forces will be needed in that country to keep Afghanistan’s troubles inside Afghanistan and to intercept any renewed attempts by Al-Qaeda or any another terrorist organization to make Afghanistan their base. But these are containment operations and not securing a nation-building endeavor. What is more important is the ability to declare victory in the graveyard of empires. This will be a huge moral booster to the coalition. And even a bigger demoralizer to the enemy.

This victory, once achieved is therefore of strategic importance. Constantly demoralizing the enemy is the only way to end their appeal and ability to recruit, fighters, technicians, engineers, propagandists, and financiers. It will also end the first phase of the War on Terror. This was the phase that started with the first attack on the World Trade Center in New – York City, on the 26th of February 1993. This was the fight against the global hierarchical Al-Qaeda, where Osama Bin Laden and Aymann Al Zawahiry were the commanders in chief, and Mullah Omar, their host and protector in Afghanistan, was the one who made it all possible. Under his protection Al-Qaeda became a global army of terrorists, able to perform horrific mass murder attacks worldwide, culminating in 9/11.

However, since Al Qaeda, and other Jihadists organizations, will definitely try to reverse this situation, this victory will launch the third phase of the “War on Terror,” the nuclear phase. The only way they can reverse the impact of an American claim of victory in Afghanistan. Knowing the vengeful nature of Al Zawahiry, who always promises heavy retributions upon the enemies of Islam, his idea of Islam, this phase may have already begun.

What makes these phases unique is that when one begins, the previous one had not necessarily ended. The second phase in the War on Terror, is the fight against regional Al Qaedas, in the Arabian Peninsula, Northwest Africa, etc. It begun with the defeat of Al Qaeda and the Taliban in Afghanistan in 2002, and will end when regional forces have the will and the means to crash them. Something that won’t happen without western support and encouragement, and some level of active participation. Fighting the three forms of Al Qaeda at the same time requires developing and implementing different strategies at the same time. That can be as complicated as a war on multiple fronts.

The nature of the war against religious fundamentalism is such that one strategic victory is not enough. If history is a teacher, and it usually is, and a good one, then we, the democracies of this world, are in for a long haul. During the middle ages, when Western Europe was under the spell of religious fanaticism, the Islamic world, the saner side at the time, was able to bring the crusades to an end, by constantly inflicting defeats on them. In a period of nearly three centuries, those defeats had an accumulating effect, which dried out the crusades from supporters and volunteers. Will it take this long this time?

Hard to tell. Today’s holy butchers make a good use of modern communication technologies to enhance the impact of their actions, and to win over recruits. There is no reason why the west shouldn’t use that as well, to enhance the impact of its victories. But the most important lesson from the killing of Osama Bin Laden, is that patient is an asset. Impatience will always play into the hands of the enemy. But if America can claim victory in Afghanistan, which is not the case yet! then there is good reason to believe it can win the War on Terror, in a shorter amount of time then it took to defeat the crusaders. But first, all three must be killed, and not just Bin Laden, until then this is all hypothetical.
Posted by Dvar Dea at 4:52 PM No comments: