Something for Shavuot: Ancient Judaism and physical (racial) differences

Now what did the rabbi mean?
It is clear from his words that the physical differences we refer today, as racial differences did not exist 1900 years ago, but why should interracial couplings be favored over same race couplings?
Here are some possible answers, none of which are offered by mainstream Judaism since this story is largely forgotten.

1) He was a fool, there is no such thing as an opposite condition to albino, and there are black people that are albinos.

2) “Brown skin rules”, since the dominate shade of skin in the ancient civilized was brown and that’s a fact of history, maybe he was a brown supremacist, even though no such movement or philosophy is known.

3) He was an incurable romantic who truly and whole-heartedly believed in opposites attract.

4) There really is a Jewish conspiracy to have black man mate with white daughters and Reish Lakish is behind it all.

5) Good business and good politics, here is another historic fact, back then what we call today interracial marriage was good business and good politics, since tribes on both sides of the Mediterranean had accesses to resources and or various skills. This was the background to the rise of the Severan dynasty in Roman Empire, an Afro Phoenician Italian dynasty of emperors from the same time frame.

6) Metaphors, marriage as a metaphor for thinking differently, outside the box, outside ones own tribe. This is possible for several reasons; first, metaphors were vastly used by the rabbis of the era. Second, the rabbi’s nickname Reish Lakish indicates that his specialty was in challenging his pupils and listeners to think. Reish means head or top of.., Lakish is the one who presents a kushia, kushia is Aramaic for question, a question that challenge people to think even if they do not intend to answer, therefore Reish Lakish, was the top man of his era in challenging people to think. Forth, this is not a commandment or a verdict, god isn’t mention, and there are no references to verses from the bible or to verdict of previous rabbis, all mandatory in passing Jewish religious legislation then and now. Therefore the albino and its opposite condition are metaphors just like the mast and the pinky, metaphors for something silly; something silly that people become when they close their mind. Fifth his own biography shows that he was the kind of person who would know what it is like to “step out of the box” out of one life style and into another. Before been a rabbi he was a ruffian, maybe even a bandit, who made his living as a gladiator. The tragedy of his story is that he fell prey into the kind boxed thinking he advised against. While debating the issue of purity of weapons with his close friend and brother in law, Rabbi Yochanan, his friend burst at him saying “You would know” a familiar expression of intolerance and prejudice from our own era. Having something like this coming out of his best friend mouth, and may be even heart, broke his heart, and he fell ill and died.

Now, putting aside this tragic turn, each can choose his or hers idea of what is the more likely interpretation, I of course go for the last 2 options. There is always room for other ideas, on the comic side as well as the serious side. I just hope like Reish Lakish, it will challenge us to think.
And though Shavuot is nearing its end Happy Shavuot Everybody.
Posted by Dvar Dea at 5:37 PM No comments:

Demonstrating my argument, Jonathan Steele at the Guardian

Honestreporting points to this pro murder article by Jonathan Steele the Guardian senior foreign affairs correspondent. An article that proves exactly what I was worried about, in my previous entry. In it Jonathan Steele’s sympathies to the Palestinians crosses the line into pro murder advocacy when he says that all Arab must support Palestinian resistance, a “resistance” that is overwhelmingly the deliberate systematic mass murder of unarmed civilians. Even more so when, through someone else’s quote, says there is no moral ground for boycotting Hamas, according to such an argument it is moral for Hamas to murder women and children and to break the international agreements their Fatah rivals signed on; and to all those he added a twisted perception of the Israel US relationship.
But what is his starting argument? Lieberman’s statement of no to a Palestinian state. Now, it is true that Jonathan Steele and others like will say what they say, and argue what argue no matter who is Israel’s PM, but why should we make it easy for them?
Posted by Dvar Dea at 10:11 PM No comments:

Why must we be the suckers now?
Avigdor Lieberman's orchestra of nonsense.

I hate to transfer internal debates to the international arena, I have a Hebrew blog for that, but in our times, when nothing stays private so to speak, some concerns and doubts need to be said.
To be blunt Israel’s foreign affairs minister public denunciation of the two state solution while de facto accepting it makes suckers of us all. While the Palestinians are the ones who actually rejected the idea, due to the statements of Lieberman and those who share his views, we have painted ourselves as the guilty party; guilty in the crime that victimized us. Because the constant Palestinian rejection of the two state solution was always expressed in brutal murderous violence against our civilian population. Therefore it’s hard for me to fathom the political wisdom behind these statements.
Even though the tone has subsided by now the bias elements in the international media, which are known to be vast, won’t let these statements be forgotten. As a result, we the advocates have to undo the damage. But bombastic statements can only be undone by other bombastic statements or a contradictory action. Any word or fact we say or use may make our case better understood on the micro level, but won’t change the general bad impression of this government.
Liberman has his followers in the advocates’ community, people I respect like Melanie Philips and Daniel Pipes, if they can defend his reasoning, so be it. But as I read the news here in Israel the new/old prime minister now talks about a political self-rule to the Palestinians whose status will be determined in the future. That status can only be only one thing and one thing alone, a Palestinian state. This means a predictable course of events, the international/peace process is going to take a few steps, when push come to shove, the Palestinian leadership will either stall or bail, and we will get the blame. Which returns us to my opening question, why must we be the suckers now?
Even if this predictable episode will not be bloody, hopefully, what’s the point of going through it?
Anybody…?
Posted by Dvar Dea at 6:22 PM No comments:

88 years ago, on May 1st, Arab inciters in Jaffa used a dispute between communists Jews and Zionist Jews in Tel Aviv to launch a pogrom on Jews of Jaffa and Jewish houses in Tel Aviv that where on the border with Jaffa and near by Arab villages.
The pictures below are in descending order of the slain body of the author and teacher Yosef Haim Brener, the most famous victim of the riots of 1921. His pupil, Tzi Shatz, who was murdered with him. Wounded survives from Jaffa that made it to Tel Aviv. The 79 years old Mordechai Haviv Asido Ashido, a shoemaker and the unofficial muchtar, village chief, of the Jews of Jaffa; he was murdered by an Arab mob that surrounded his home, after he tried to reason with them. 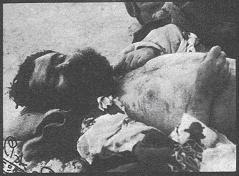 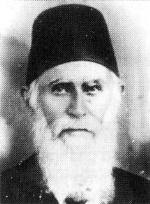 The pogrom was followed by attacks on Petach Tikva, Rehovot, and Gedera.
Posted by Dvar Dea at 7:10 PM 2 comments: