For anyone who enjoys a professional work on television, especially satire, ‘The Daily Show’ with Jon Stewart is an almost guaranteed delight. Even on October the 28th 2009, when his guests were leading Palestinian propagandists, Dr. Mustafa Barghouti and his current sidekick Anna Baltzer. It was a wall-to-wall professional performance by all participants. Jon Stewart was naturally professional in managing a sensitive subject with a somewhat charged audience, and his guests were professionals in doing their job and administrating their poison. 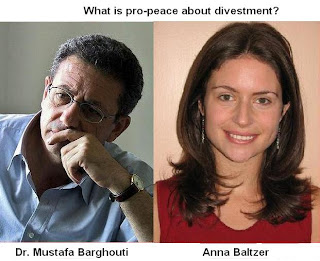 Speaking to a pro Israeli, pro Jewish public opinion, they had to appear pro Jewish themselves. But with an anti-Israeli purpose they had to shove in their hateful messages somehow, and as professionals they did so.

Four simple messages, simple and false, slipped between praise for the Jews as people caring for the weak and the oppressed:

The first one was that there are a lot of Israelis behind them. The fact of the matter is that when people sharing Baltzer’s political convictions showed up to demonstrate during Israel’s Hebrew Book fair in Tel Aviv in June 2009, there were barely 15 people among them, shouting in English, carrying signs in English, in a Hebrew language event (I was there). In other words, they were not there to win over Israelis, just to get their pictures taken and leave. In Israel, organizations with convictions close to that of Anna Baltzer have to spread throughout the country just to get a hundred Israeli Jews. Why?

Because they are not trying to win over Israeli Jews!

Second was Dr. Barghouti's statement that the state of Israel used the language of force for 60 years. This statement is evidently false by a simple examination of the historic facts: when the UN General Assembly voted for the two states solution in 1947 the Yishuv, the pre-state Jewish community in the land of Israel, accepted, the Palestinians and the Arab world rejected, violently. When a new government took power in Egypt in 1952, Ben Gurion sent a message of peace, but that government, that of Gamal Abdel Nasser marshaled the Arab world against Israel, culminating in the wars of 1956 and 1967. After the Israeli victories of 1967, Israel offered territories for peace but was answered by the Khartoum no, nos, and war resumed. When president Sa’adat of Egypt offered peace in 1977 Israel replied with a YES and evacuated the Sinai, including all settlements there. And this record goes on until these very days.

So why did Dr. Barghouti make such a monstrous lie? May be because his definition of a forceful act is different then that of the rest of the world, and he regards the very existence of Israel as something he is forced to accept against his will and against his convictions.

Anna Baltzer made the false comparison between Israel’s alleged violations of UN resolutions and those of Iraq, and Iraq got bombed for its violations.
Does she want Israel to get bombed? She stopped herself there.

Anna Baltzer also repeated the familiar line about Jews living good under Islamic rule. It’s the old 50’s reasoning that said, ‘slaves like to be whipped’, the 1850’s that is. Because while there were relatively tolerant rulers in Islamic history; much like in the Christian world; they were not necessarily the norm, as recent history records. With examples such as Ali Burzi Pasha of Libya who murdered hundreds of Jews in 1785, Algiers where Jews were massacred in 1815 and 1830, Damascus where a classical blood libel lead to the murder of Jews in 1840, Safed, whose Jews were brutalized, plundered and killed in 33 days long fest by their Palestinian neighbors in 1834. Mashhed Iran, where Jews were forced to convert to Islam in 1839, and Baghdad where a famous pogrom took place in 1941, and more.

Now why would a Jew, or any other minority will have warm feelings for these kinds of memories? Why would those feelings be any different then those a slave has towards the whip?

Finally they claimed their divestment campaign is a non-violent resistance. Is it?
Have they ever condemned the murderous acts of Palestinian terrorist organizations?
Challenged them?
Protested them?

Have they encouraged a single farmer on the path of Israel’s security barrier to say ‘not through my land’ not just to Israel but also to the members of those armed groups, who crossed over so many times and murdered so many people in the name of that farmer and his people, in the name of Palestine?

Because if their punishment - oriented boycott campaign against Israel hasn’t even tried to avert a single suicide attack, a single rocket, then it is not there to replace the violent struggle, but to assist it, and support it, by punishing Israel for successfully defending its citizens. 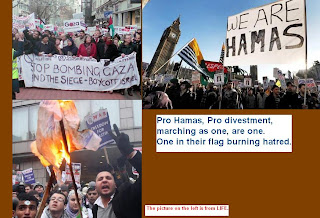 I do not wish to challenge CAMERA’s impressive record in monitoring media bias and inaccuracies regarding Israel and the Middle East conflict. However, Steven Stotsky criticism of Jon Stewart hosting Anna Baltzer and Dr. Mustafa Barghouti on ‘The Daily Show’ of October the 28th, is simply wrong. While I do share Stotsky’s outrage over the poisonous lies the two guests spread throughout the interview and like him I can point out their murderous intentions towards the Israeli population I see no reason why this outrage should spillover to ‘The Daily Show’ and its staff.
Throughout the years this show had maintained successfully a delicate balance, on one hand expressing unapologetically left wing liberal American views (not necessarily extremists), while hosting guests from a variety of political views, including the far right, such as Pat Buchanan and others. And each guest was given the same amount of respect, where he or she were given the time to express their views even when disagreements were prime. Regarding the Israeli Palestinian conflict the people behind the show took the neutral position, especially when interviewing guests, putting their own views aside.
These are all legitimate professional decisions, which should be respected. Along with the ability to make people laugh, even from things they disagreed with, they gave ‘The Daily Show’ its success and credibility. Deviating from them would have been bias in its ugliest form; the kind Israel is expose to from the more serious media outlets.
With guests like Anna Baltzer and Dr. Mustafa Barghouti this record was undoubtedly challenged to its maximum, and Jon Stewart did indeed handle it with care, trying to find a common ground with his guests on one hand (a common ground for Israelis and Palestinians), and allowing members of the audience to vent their emotions on the other hand. While these two were clearly there to spread lies and hate, ethics demands they should be given a stage, because the same ethics, when practiced gives us a stage:

Is there a hope for peace?

I gave up long ago, which makes me a member of the majority here in Israel, and probably among the Palestinians as well, but sometimes people can surprise us for the better.
Usually talkbackers are full of trash talk and hate speech, but in this article by Yoram Ettinger, Mohammad and Said from Jordan had a lengthy constructive conversation with William and Logic from Israel.
This is only a trickle of hope, but by god I was thirsty, and so do a lot of other people.
Posted by Dvar Dea at 4:54 PM No comments:

J Street won’t decide the future of the peace process

DDizengoff Street in Tel Aviv will,
YYaffo Street in Jerusalem will,
The streets of Haifa, Netanya, Hadera, Gedera, Ra’anana, Kfar Saba and Rishon Letzion. Beer Sheva, Eilat, Askelon, Ashdod, Netivot and Sderot. Those and more, big and small, are the communities, whose residents will decide the future of the peace process. J Street can boo the critiques of the Goldstone report, advance it in the halls of power, praise the apologists and advocated of the Palestinian mass murder campaigns, all they like. Our lives are at stake, we, the citizens of Israel, have the final veto.
Posted by Dvar Dea at 2:43 PM No comments: