Haiti earthquake – A blessing to the rescuers and the aid givers

Whatever conclusion we, as human beings, draw from this disaster; final words must be those of gratitude and hope.

Blessed be the rescuers from all over the world, the rescue teams the doctors, and nurses, the members of the aid organizations, giving food, cover and care in dire conditions. Blessed be the soldiers defending against the rage of despair, blessed be the engineers clearing roads and pathway, removing traps that caught the helpless, blessed be the donors. For they have shown us that within us there is the human brotherhood and strength of the spirit and the resourcefulness of the minds to stem and overcome the horrors and despair that are befalling on us from time to time.


And Blessed be the Lord, Amen Selah
Posted by Dvar Dea at 6:14 PM No comments:

Haiti disaster, the media coverage of the Israeli rescue efforts, questions of pride and shame

There is no question that like the rest of my people I feel proud at the work my fellow countrymen are doing Haiti.
Proud, though I myself had very little to do with it.
Proud of the lives they saved.
Proud of them becoming an integral and critical part of a Global Team Effort, as the news services reported.
Proud as every member of every nation that have people there that help, save, and provide the helpless and the needy.
The Americans, that came in mass to prepare the infrastructure to receive the help they and the whole world sent and to secure it.
The neighboring nations of the Caribbean and the Americas, whether rich or poor, that rushed to help.
And many other nationalities and organizations from all over the world that came to save not only the lives of Haitian but the dignity of the entire human race.

Haiti disaster, the media coverage of the Israeli rescue mission to the stricken Caribbean nation

By all accounts the earthquake that had hit Haiti is a disaster far worse then we can imagine. There are no words or images the can describe properly the scales of that catastrophe, despite constant efforts by the international media to just that.

When it comes to covering this disaster the important task in front the world news services is telling it’s scale, the helplessness of the survivors there, and the life threatening conditions of many of the injured. In my personal opinion the internal media had done just that and for that, CNN, BBC, SKY, Fox, and the American network deserve the highest praise. Though I was unable to review all the work done by other networks the general impression is the same. The works of Dr. Sanjay Gupta of CNN covering the places were the gallant medical crews that came from around the world were unable to reach, and his college Anderson Cooper who went farther out of Port Au Prince as possible are in my opinion the best and most persistent attempts to capture the magnitude of that distraction. And while the heroes of this tragedy are undeniably the rescue teams and medical crews from around the world, credit must also go the international media for doing its part. The part it suppose to do, and while at it taking part in the rescue efforts themselves, as did the medical correspondents, in some of the examples below.

CNN: From the Israeli angel by Paula Hancocks

CNN: Chris Lawrence on IsraAID and the international effort:

Visit msnbc.com for breaking news, world news, and news about the economy

There is no denying that as an Israeli and an Israeli advocate I take much pride and pleasure in seen the efforts of my country, the field hospital, the rescue teams, Israaid, doing their part in face of a desperate situation, as a part of a global team effort.
Posted by Dvar Dea at 12:36 PM No comments:

I hope this piece stays on YouTube forever, for some reason I was unable to find on the CNN website.

I do not know who is the person who out it there, but kudos to him/her.
Posted by Dvar Dea at 10:31 PM No comments:

One year after ‘Operation Cast Lead’, Israel’s picture of victory. 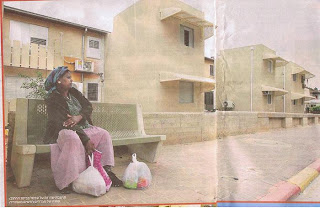 This picture, taken by photojournalist Gadi Caballo, and published in Israel leading newspaper Yediot Achronot on December the 28th 2009 is in my opinion Israel’s picture of victory of the ‘Gaza War’ or as we call it in Israel ‘Operation Cast Lead’.

This picture shows the normality of the town, which was always harsh, but did not include the immediate presence of death.

The structures behind the old woman, attached to those two floors buildings are security rooms, their propose is to provide immediate shelter in case of renewed enemy attacks, be it Qassam rockets, Katyusha rockets or Grad missiles.

These structures are Sderot recognizable feature. Paris has the Eiffel Tower, Venice the canals and gondolas, London the Big Ben and the black taxi cabs, the small town of Sderot has these.

The fear of another round of violence shows that the victory is not complete, but the fact that we won, that we are the ones who have returned to normality, is something for the enemy to think about, especially Hamas.
Posted by Dvar Dea at 6:35 PM 4 comments: