In Btvs booklet about the 40th anniversary of the occupation, Steven David Masters, their second president elect, demonstrate the core problem with his co believers approach to the realities Israel and Israelis face.
In his piece he glorifies an anthology of conversations with veterans of the 1967 war made by Amos Oz, Muki Tzur and other members of the kibbutz movement a year after that war. It was called “The seventh day; soldiers talks about the six day war”, or in Hebrew ‘Si’akh Lokhamim’, (si’ahk is Hebrew for a conversation that is more meaningful then just talk).

This Si’akh Lokhamim was an important soul searching experience for a lot of Israelis in the years after the victory of the six-day war. But with 40 years insight it had generated some criticism. That criticism focuses on the exclusion of combatants who were not members of kibbutzim from Si’akh Lokhamim. Most notably among them are the students of ‘Mercaz Harav’ the religious academic institution in Jerusalem from which the settlers’ movement came, but also and probably more important are the non European Jews from the development towns and the low-income neighborhoods in the cities.
The reasons for this exclusion may have been just a matter of convenience, both social and psychological. It is easier for a researcher to interview people with the same background as his, and it is easier for them open up to him. The may have also been an element of elitism, as some critics here in Israel will say, after all many of the country leaders in those days did came from the kibbutzim, others will point to the heavy price the kibbutzim paid in that war, because they where the elite they served in and lead many of the combat units in the IDF and the price they paid was disproportionally higher then other segments of the society. An inner discussion was therefore badly needed.
Whatever the reasons, this exclusion, which Masters applauds, is now blamed for what is now known in Israel as the left wing bubble or the Tel Aviv bubble, the inability of major left wing movements such as ‘Peace Now’ and the Meretz party to reach to other sections of the Israeli society beyond the kibbutzim and the Urban Ashkenazi elite.

Glorifying a bubble suggests that the glorifier himself lives in a bubble. And a good indicator of that is the image he has of Si’akh Lokhamim, because that image, of a moral outcry against the occupation is wrong. Si’akh Lokhamim did discuss morality, the morality of war, of killing other people, of getting killed, and leading others to their death, and the feeling towards those responsible to that death, the leaders of both sides.
Back then in 1968 the Israeli equation of Ashkenazi kibbutznic = left wing peace activist did not exist, and not all the views expressed in Si’akh Lokhamim will be considered left wing peace activists talk today, such as the views of Aharon and Lotan at the beginning of the book, about the Israeli relation to Jerusalem and the security importance of the newly gained territories. Lotan also recalls how in the days leading to the war a Jewish shop keeper started making a lot of many selling knives to local Israeli Arabs, who were buying them in big numbers, when he realized what they were for (killing Jews, though the book does not say so explicitly) he closed his bossiness. In Ramat Yochanan a discussion between two generations took place, and in it both father and son said the war strengthened their connection to the land, and other war veterans spoke of hating the enemy, the Arabs. These are hardly left wing views, especially not the kind that fit the rigid worldview of Btvs, the most dominate of them was the realization the if the war had ended differently the other side would not have such soul searching conversations.
It is an irony of history that this left wing bubble sees its own origin through the crust of its bubble. Here in Israel since the beginning of the Oslo process, Palestinian mass murder campaigns had blown it up into more and more diminishing sizes. What is the situation on the other side of the Atlantic I do not know, but clearly with at least one group of political activists it as strong as if the Oslo process hasn’t even begun.

This is a continuation of an earlier post.
Posted by Dvar Dea at 12:49 PM No comments:

175 years to the Great Plunder of Safed

On June 15 1834, in the midst of a regional crisis due to a war between Muhammad Ali’s Egypt and the Turkish Ottoman Empire, Arab mob, incited by a ‘prophet’ named Muhammad Damoor, attacked the Jews of Safed, forcing them to flee and hide in the inhospitable conditions of the surrounding mountains. For 33 days they brutalized the Jews of that holly city, seeking hidden treasures in the Jewish houses that they decimated. In the middle of that carnage they stopped, assembled and democratically decided to continue, and did so until forces from the Lebanon interfere on the 17 of July and stopped that forgotten pogrom.
That crime is worth remembering for two reasons, it shows that the Palestinian conduct of attacking and murdering unarmed Jews predates not only the 1967 occupation and even the creation of the state of Israel in 1948, but it also predate Zionism. In 1878 Jews from Jerusalem and Safed got organized and founded the first Zionist communities of Petakh – Tikvah and Rosh – Pinah, marking the official beginning of the Zionist movement as far as mainstream history is concern. The second reason is that this was a regular pogrom, no different then any other experienced by Jews in other parts of the world throughout the 19 century, in Russia, Yemen, east and central Europe, North Africa and Iran.
It was the consistency of these pogroms throughout the Jewish world, not only in 19 century but also before and after, that had lead to the evolvement of the Jewish national liberation movement, Zionism. Each pogrom alone demonstrated the helplessness and hopelessness of the Jewish condition. Jews felt they had become a dust of a people, both as a collective and as individuals. But it wasn’t just one pogrom, it was endless, and Zionism showed one way to end it, one that worked.
Posted by Dvar Dea at 4:21 PM No comments:

We have every right to be afraid of a Palestinian state.

It may be the right solution.
It probably is the right the solution, two states one besides the other, but given history, given the fact of what they did with every territory we handed them, we the Israelis, have every right to be afraid of a Palestinian state. 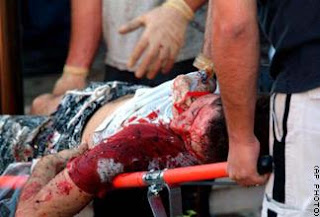 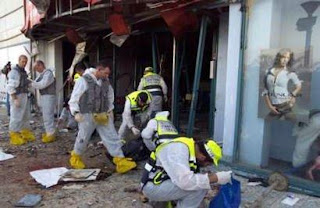 And there is no need to explain why.
Posted by Dvar Dea at 9:33 AM No comments:

Akiva Eldar article in the SF Sentinel, hatemongering in America

One can only wonder and speculate as to what drove Akiva Eldar, the political commentator of Haaretz to publish such an irrational and emotional article at the SF Sentinel.
Under the inflaming title “What would happen if Israel defeats Obama” Eldar builds into a short remark of disappointment from the current US administration that was made by an unnamed “senior Israeli official” in Jerusalem things that are not there. With the opening sentence “You had to read it twice to believe it” he create the false impression that this remark was somehow surprising, while in fact due to the opposing views the two governments has over the settlements issue, various analysts had expected worse, and still do. Through the literary tool of false/imaginary quotes from the Israeli government such as “What chutzpah on the part of Barack Obama…”, and “Otherwise Jerusalem will reassess its special relationship with Washington,” he baselessly attributes to Israel and its government attitudes of arrogance and dominance towards the Obama administration. He then goes on with and the apocalyptic question “What will happen if we destroy the prestige of the strongest man in the world and portray him as an empty vessel, incapable of halting the settlement program of a U.S. protégé? Will an Israeli “victory” strengthen the status of the U.S. in the international campaign against Iran?” this is a fear that isn’t grounds in reality, even billion illegal outposts cannot affect the American administration; they can only serve to alienate Israel. Yet Akiva Eldar seem hysterically convinced such conspiracies are on their way. And all that paranoid fantasy he bases on a short, minimized, and totally expected remark by an Israeli official.
This could have been excused as some sort on sarcastic inner Israeli humor, but he did not write this to an Israeli public but to an American one and on the eve of Obama speech in Cairo. And it is this that makes it a hatemongering piece and all the mudslinging at the Israeli right that composes the rest of his SF Sentinel piece; shows clearly his motive, he hates the Israeli right – a lot.
The question thus is not WHY he tried to agitate Americans into an internal Israeli dispute, but what came over him.
A more calculus Akiva Eldar exist elsewhere. This is clearly not a representative of one of his finer moments. Sadly that happens a lot to the Israeli left recently.