The moral crisis of the American immigration policies of 2018.

A critical review of all of us. 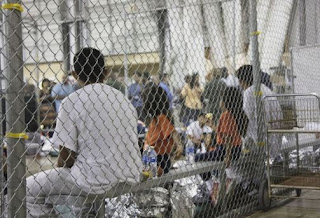 
Acknowledging that does not mean that a policy of sweeping amnesty or relaxation of enforcement should be adopted. Such policies will make the distinction between legal and illegal immigration pointless. They will also encourage all sorts of criminals to come over. And any country has the right to be upset when the social problems of other countries are exported to it. Not to mention that that too will conflate criminals with ordinary people coming over illegally. Keeping away criminals is a duty of every sovereign nation. It is a duty to all its citizens and residents, and that includes immigrants, legal and illegal ones.
Zero tolerance sound deterring, but that depends on its effectiveness. It may catch a thousand, but thousands more will escape. And most of the criminals are likely to be among those that were not apprehended. After all they already have experience in evading the law. These are the brightest that are more likely to be deterred, the ones president Trump wants to bring in. This is because each and every legal immigrant is one bureaucratic mishap away from been classified as illegal. And the more complex the bureaucracy is - the greater are the chances for a mishap. Therefore the mere risk of been treated as a criminal is enough to deter away those that have alternatives. And the brightest have alternatives. And if they have to fear been separated from their families, their children, then the less attractive possibilities will become more attractive, far more.
The biggest falsehood in the immigration debate is the perception that there are easy solutions. Whether it is Steve Bannon's Zero tolerance policy, Jeremy Corbyn's let them all-in advocacy, or the Israeli policy of ignoring the issue as if it is going to go away on its own. With the third example been the dumbest, wit is not the demonstrated property of any of these approaches.
The Israeli policy of no policy had turned a handful of neighborhoods into dumping grounds for the illegals. This had created over crowdedness that was beyond the ability of the local infrastructure to support. Obviously, this made life miserable for these migrants, and the local residents. This added to the tension between the two populations, which in turn added to the stress. And this cycle has so far, no end in sight, even after this migration wave has largely stopped.

The let them all-in policy, practiced and led by Angela Merkel, brought about the Cologne riots of December 2015. This massive criminal and sexual assault that took place in several German cities was perpetuated largely by work migrants from North West Africa, not war refugees. They first had exploited the open door policy of Western Europe known as the good will policy. That policy was aimed at helping refugees from war turn countries such as Syria, Iraq, Afghanistan, and Yemen. But the countries in North West Africa that these work migrants came from do not suffer from the turmoil of the Arab spring. They are just poorer countries. We all have the right for social mobility, but should we do it at the expense of someone else's lives? This was a clear-cut case of massive exploitation and abuse of the good will policy and the plight of the actual war refugees. Having done one wrong collectively, it was easy for a sizeable portion of them to do other wrongs collectively, and openly.
Here, Europe failed to distinguish between lands where people's lives were in daily danger, and those that are simply at an economic disadvantage. Such a distinction is not always easy to make. In some countries the economic conditions are so dire; poverty places people's lives in almost daily, life threatening situations, especially children. This is what amplifies the difficulties in forming a policy, both in Israel and the USA. No one wants to send people to their death. And nobody wants that desire to be exploited; by anyone – for whatever reason. In the events leading to the Cologne riots, such a distinction could have been made easily. Instead European decision makers grouped all Muslims and all Arabs into one category of helpless individuals. This allowed the better off North West Africans to abuse both Europe’s, and those that were truly running for their lives. The backlash that was created by this had turned against all the immigrants. 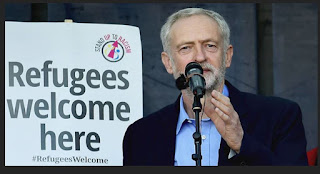 The Bannon doctrine had been shamed by the families' separation affair. But that is just a symptom of a greater folly. As I said before, solving the problems relating to immigration is more difficult than solving the Israeli Palestinian conflict, or any other political conflict for that matter. The reason is because this is not something a single act or a single policy can resolve. It is a management challenge, a global one. This means working with others to resolve it, and Trump's election rhetoric sabotaged that. His rhetoric was generalizing, de-humanizing, and racist. No matter how severe the problem of crime in the USA is; and even if those illegal migrants are over-represented in the statistics of criminal activity. That rhetoric remains unjustified. It also alienated vast segments of the American public, and not just the Hispanic population. Among communities that historically suffered a lot from racist oppression, this language reawakened traumas that weren’t dormant in the first place. And the list is long, with Jews and African Americans on the top. For many of them standing up to president Trump and Bannon became a matter of survival and anger. Survival: because of the bitter lessons of the past regarding the outcome of such rhetoric. Anger: because they see it as the need to do the civil right struggle all over again. And the resentment that came from that is aimed against any member of the Trump administration, and any idea and any policy they come up with, good or bad.
Trump’s rhetoric and Bannon’s ideas created two management problems, external and internal. The external problem is the alienation of the people of Mexico, were most of the migration movement goes through, as well as many of the migrants. And there is no doubt other nationalities across Latin America were also alienated. The internal one is in the shape of what is known as sanctuary cities. These are cities, states and counties that decided to go against the federal government over the immigration issue and protect the illegal immigrants living in their territory. The fear created by the rhetoric of the president of the USA been the main reason.

In order to have a working policy on immigration, the Trump administration has to work with both oppositions, at home and abroad. A simple matter of realpolitik by the relevant countries across Latin America will make it possible. But the resentment of the general population will limit that cooperation.
As for the internal opposition, this one is made up of people afraid for their very lives. They won't compromise so easily. One of the ways to overcome this opposition is to win over those cities and states in upcoming elections. This is what Bannon is doing in Europe. If successful, nationally and globally (globally been Europe, not Latin America), all of the responsibility of solving the problems of global mass migration will fall on them, on the Bannon camp. They will have to go beyond demagogy, and beyond policy, and manage the issue with other governments across the world. However, some of these governments are so corrupt they are in bed with global criminal organizations and human traffickers. That means they will be working with people they now know will screw them over. This is a reality every government in the democratic world faces, no matter what its ideology is. The problem is that the main outcome of zero tolerance on illegal immigration, along with restrictions on legal immigration, is a higher demand for the services of human traffickers; by their very victims. This will give them a stronger hand or even an upper hand. This is something no politician can afford, especially those that promised to make fighting crime a high priority.
The failure of world’s leadership to properly and effectively address the challenges of global migration has left the ground open for populists of all sorts. These populists have made the management of the situation more difficult. If they win overwhelmingly, management will not be possible. If they lose, mainstream politicians will have to take into account the social forces they have gathered, undermining the little effectiveness better management can create. The biggest tragedy is that should any or all of these populist politicians decide to actually resolve this; they will have to go against their base, against their election promises. Since this is a management challenge, solution will not be immediate. And such incumbent candidates will not be able to justify this to their base. And that may open the door for the pure and unapologetic, poisonous bigots. And while non-of these possibilities is an apocalyptic nightmare, the harm that will come from this mis management, will affect us all. The need to make moral compromises does not mean that every morally problematic decision is the wise one. History has shown us that mass migration stopped only when the conditions in the countries of origin had changed. The forces of history had more to do with those changes than actual policies. It shouldn't be the case now, but it is. This crisis does not need populist slogans. It needs new ideas. I wish I had any to give.