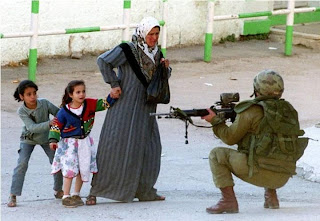 The picture above is one of the more famous instruments of Palestinian propaganda. It is found on many Palestinian and pro – Palestinian sites, and had reached iconic levels even at leftwing circles. It was taken in 2002 during 'Operation Defensive Shield.' This was 's largest counter-terrorism operation, which ended nearly a year and a half of mass murder attacks on Israeli civilians.

It's suppose to be an Israeli soldier abusing a Palestinian family. According to the picture he is doing that from a kneeling position with a snipers rifle in his hand. Now, just the basics: In order to abuse someone the victims has to be completely helpless, and under total control of the abuser. And how does an abuser suppose to achieve that from a kneeling position?

He cannot – that simple, no one can. Basic anatomy of all assault crimes, the abuser keeps the victim close to the ground or the wall, never the other way around. If the soldier intended to abuse someone he would be standing. Instead he is kneeling with a sniper rifle in his hands. Why? Because he is a sniper, he is kneeling because that is what snipers do. When they are in the kneeling position snipers become smaller targets to the snipers of the other side.
So why is this soldier kneeling in the middle of a Palestinian street?
Simple, there are Palestinian snipers on the other side, away from the area captured by the photo.
And what do civilians do when a shootout is about to begin?
Get the hell out!

And that is exactly what the mother with the two children is doing. Look how she holds the hand of younger child. She is a responsible person. The rifle isn't even pointed at her. Look closely, it is pointed away from them.

Yes those two girls are afraid. Or do they? 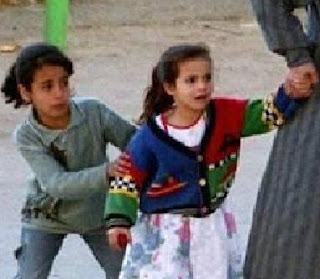 The older one looks apprehensive, but also curious, peeping from behind her sister's back. The younger one is either surprised or was in a middle of a sentence when the photo was taken. One thing is clear, no one is afraid from the kneeling soldier, not the girls, not the mother. And one of the reasons they are not afraid of him is because there are not being abused by him. They simply passed by this sniper while getting away from a possible fire fight; a fire fight that probably didn't happen, since at the time most Palestinian gunmen preferred to leave and avoid confrontation.

Now it seems this photo did not serve the Palestinian propaganda machine as intended. So it was photoshoped. The mother was removed all together. And the soldier's rifle was rotated so it can point at the girls. But in the process it positioned the soldier in an unnatural way. No one can stand like that and maintain balance, especially with a rifle in the hand and weight on the back. Maybe an acrobat can, but with an effort. 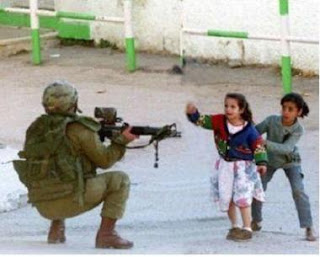