President Obama's Jerusalem speech – A speech we can work with 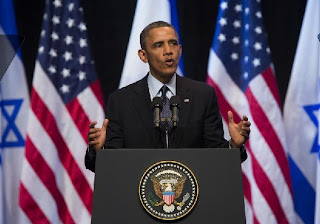 I have to admit, I had my concerns prior to President Barak Obama speech of March 23rd . Ben Rhods interview to the Israeli press was really frightening; even now I shiver slightly when I think of it. But after listening and reading President Obamabrilliantly planed speech, I am allowing myself a wider degree of optimism. The reason is simple, President Obama did everything he could to encourage the possibility of peace. And that puts the peace process in a far better place.

When it comes to advancing a peace process first thing, create a desirable image of peace. Describing 's success in the civilian eras of agriculture and high-tech, with the opportunities for social and economic prosperity, serve that purpose. Second, acknowledge the risks involved, it adds credibility, making the idea of peace look less like a dream and more down – to – earth; especially when acknowledging that there are threats to peace at the other side. Threats such as: terrorism, hatred produced by years of propaganda and incitement, and the very idea of rejecting 's right to exist as a Jewish state.

" cannot be expected to negotiate with anyone who is dedicated to its destruction." A line of truth aimed at non-other than the hard core left. For years Israelis have been hearing "you don't make peace with your friends, you make peace with your enemies." implemented that logic with the Mubarak regime. For a while it worked. wanted the Sinai back and that was more important to them than the objection to 's existence. But the objection remind, manifesting in the form of incitement encouraged by the Mubarak regime and by opposition forces. As a result, all segments of Egyptian society are now hostile to . And that is undermining the peace treaty. Today, minimal diplomatic exchangesare viewed as scandalous. There is a very simple universal truth behind this situation. Problems do not go away just because we ignore them. For decades critics of the settlements policy did just that. Constantly ignoring the incitement against 's right to exist; incitement that prevails throughout the Arab world, and does not stop with . As a result they lost their credibility in the eyes of the Israeli public, and rightfully so.

But before all of that President Obama had to create a platform of trust in order to connect between him and the Israeli public. Reaffirming 's history, identity, connection to the land and the right of the Jews for self-determination, all did that. Humor and charisma helped too, a lot. To the annalists this trust is about getting the Israeli public to pressure the Israeli leadership. But trust is required for something far more important than this myopia. Trust is what keeps a peace process moving. Getting the leaders to act is only secondary to creating a trust between Israelis and Palestinians. The media, not surprisingly, ignored that, Obama did not, and that is for his credit. The story about Palestinian youth that want to get a lone just like Israelis do meant to do just that. Give Israelis a human face of the enemy. Was it naive as the right wing claim? Absolutely! One does not have to be a right wing to know that. Yet, it is essential, because peace is about getting each side to see the other as human beings! Whatever our political convictions may be, only those of us that are trying to find humanity in the other side want peace.

What was lost by all the annalists and commentators, left and right, is that all the merits of listed by the president simply describe Jews as human being. As people that all they want is "the ability to make their own decisions and to get an education, get a good job; to worship God in their own way; to get married; to raise a family." And like all nations have the right for self-determination.

Not surprisingly a single voice of outrage came from the Arab world. As far as that outrage was concerned, getting Israeli Jews to see Palestinian as human being is insignificant. It is more important to deny that from Jews. The logic behind that outrage is very simple. If you deny one group the right to be human beings, the right to exist, why would you want them to acknowledge the humanity of your own group?

And yes, this proves the naivety in the president's request. Loudly!
But don't let that loudness hush what comes next:

"One of the great ironies of what’s happening in the broader region is that so much of what people are yearning for -- education, entrepreneurship, the ability to start a business without paying a bribe, the ability to connect to the global economy -- those are things that can be found here in . This should be a hub for thriving regional trade, and an engine for opportunity."

There is a message here to the Arab world. A message to that outrage, "You need ." Only those familiar with the frustrations involved when trying to improve the standard of living in the Arab world will know that. And there is nothing naïve about that. For obvious reasons Israelis are not familiar with this experience. This is criticism of the Arab world and it is long overdue. It is a call for the Arab world to make an outreach to . And that is new.

Peace requires an effort by both sides. That effort requires a will. Will cannot be imposed, but it can be encouraged. That is the role of the international community. The job of the is to make sure the international community remains in that role and not become another battlefield between the two sides. When the gives reasons for both sides to want peace, security for , and prosperity for the Arab World, it does both things. Encourages the formation of a will in both sides and maintains the integrity of the international community. Standing beside blocks attempts to score points against in that battlefield. Therefore, the framework in which a peace process can take place is there. But a framework is barely a corner stone. The Israeli applause to the president speech showed that on the Israeli side the will exist. If there is a will on the Arab side, the outrage that came from there hides it well.

This summation does not sound very optimistic, but before that there wasn't even a framework. And in a process that has been a major source of frustrations, even the possibility of hope is a progress worthy of our blessing. The only cloud is the apology to Erdogan. Being a possessor of fascist characteristics he will only use it for his advantage and not for the benefit of the region. The way he and his foreign minister, Davutoglu, have been bragging about this suggests they are planning another Mavi Marmara. And that will only increase the tensions that already exist.

Obama's visit to Israel, a disaster to come?

By the time this will be posted on my blog president Barak Obama will be in , or just about to. His long awaited, not so long awaited, necessary, not necessary visit will finally take place.
If you follow all the discussions in media, from MSNBC to Fox, the visit is not about advancing the peace process. It is about winning over the Israeli public. As Jeffrey Goldberg puts it: "Crack the Israeli code".
Why is that important?
Popularity never hearts in politics, and without the backing of a popular figure the peace process cannot gain popular support. So it is about the peace process. It is just that other presidents did not need to do that. They always enjoyed a strong popularity among the Israeli public; especially George W. Bush and Bill Clinton. Obama on the other hand has the lowest popularity figures any serving president ever had. Therefore, if he wants to push the peace process forwards, he need to increase his popularity among Israelis.
It is a separated discussion as to why his popularity so low. The more urgent question is, is it doable?
Yes, it is doable. Israelis like liking American presidents.
That does not mean it is going to happen. Judging from the remarks Deputy National Ssecurity advisor Ben Rhods gave to the Israeli press corps, optimism has little to hold on to.
All the damage is in this quote:

"The believes that must show it is serious about its peace efforts. It must convince the general Arab public, if nothing more to maintain 's peace treaty with ."

This statement is wrong on several levels. First it is patronizing. Friendly atmosphere cannot start with telling people they must behave themselves. Even if the patronizing is correct. The problem with this patronization is that it is neither. It is not correct it and it is not incorrect. Each side has its own ideas as to what is serious about peace and what is not serious about peace. In a peace process the peace broker is not suppose to give the two parties another reason to bicker.

And it gets worse, because the way Ben Rhods phrased his advice he already took a side in a dispute that has not happened yet!
He took the side of . This alienates Israelis because from their point of view they have already made a series of territorial concessions, with security risks attached. Some may not consider these concessions serious since the settlements continue to expand. Right or wrong this is precisely the kind of a debate a peace broker hopes to avoid.
But in peace making debates like this are nothing more than headaches. Now, these headaches are not fun, to say the least. Ask James Baker III; ask Madeleine Albright; ask Henry Kissinger. But broken peace accords are worse.

Right now is ruled by the Muslim Brotherhood. This is a popular political party that opposed the peace process vehemently. It is reality and American pressure that prevents them from breaking it. Since Ben Rhods took 's side, he gave them a way out of the peace accords. With each side having its own ideas as to what 'serious about peace' is, all the Egyptian leadership has to do is to use Ben Rhods remarks as a go ahead is to constantly claim Israel is not serious about peace, back it up with mass street demonstration, which they can arrange easily. Until finally they have an excuse to break the Camp David Peace Accords. Needless to say, the Camp David Peace Accords are one the most important achievements of American foreign policy. Something both Democratic and Republican administrations worked hard to achieve and maintain.
None of these had happened yet, thankfully. All that is needed is for the most powerful man on earth to express this logic publicly. The impression from the discussions in the Israeli media is that is not going to happen. Let hope these impressions are correct since Ben Rhods is the one writing the president's speeches for president Barak Obama visit to Israel.
Posted by Dvar Dea at 11:48 PM No comments: