Women of valor – heroines of Zionism and Israel

A recent debate in Israel about whose portrait should be on the yet-to-be issued new currency notes put the focus on the role of women in the history of the state of Israel and the years leading to its establishment.

This led me to make this long, yet incomplete list of prominent and other remarkable women in the history of Israel and Zionism. I’ve gathered most of the information from the Hebrew web. On some there is material in English, and I provided links in those instances. In many cases the information is scant, some had even been forgotten from Israel’s collective memory.
This list is by no means complete, but a farther research will require some leg work in universities and public libraries. I do hope that by just mentioning them I’m giving them some of the honor they deserve, though no doubt they deserve far more than a blog post can provide. 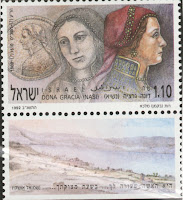 First among the firsts and first ahead all the firsts, a banker, a philanthropist and a stateswoman, a member of a known family of Jewish marranos who fled the inquisition in Portugal to Antwerp. Like Yehuda Halevi befor her, she was a precursor of Zionism. He dreamed about the return to Zion in his poems, she lobbied for it in Istanbul. Her work led to the return of the Jews to the city of Tiberias, one of the four holy cites in Judaism. (The others are Jerusalem, Safed and Hebron). For more information click here 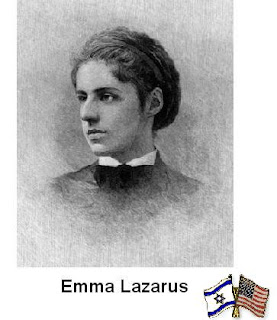 Where does this bond between the United States of America and Israel exist?

It exists in numerous places along history and culture; and in the very psyche of both nations. One such place is Emma Lazarus; her famous words carved at the statue of Liberty gave America a new ethos and a place of morality among the nations. Like Dona Gracia, she was a Jew of Portuguese origin, and one of the firsts public figures to embrace Zionism. For more information click here.

Little needs to be said about most of these remarkable women.

Israel’s first woman prime minister was a stateswoman of great stature, who has been through Israel’s toughest hours, when hard decisions had to be made, from The War of Independence to The Yom-Kippur war. For more information click here.

She began her career in the times of British mandatory rule. Her song reflected the resistance to the foreign power, and served as a focus of hope and a source of strength to the entire society. In the years following Israel’s independence, her voice and songs became national symbols of Israel, along side the flag and the national anthem.

The first ‘First Lady’ of the Israeli theatre.

An educator and a leading social activist, her memory has eroded in Israel over the years, as sadly did her legacy. She made Israel a welfare state long before there was Israel, and shaped its society into one that puts the concerns for the weak and the needy close to its heart, and the education and well being of its youth at its center.

Other famous women of legendary fame the warriors Sarah Aharonson, 1870-1917, and the poet Hanna Senesh, 1921-1944. They lived in different times but those periods were demanding and dangerous. Of their own choice they volunteered to help change the fate of their people for the better. Sarah chose the risky and ungrateful work of espionage during the upheavals of the First World War, and Hannah volunteered to be a commando deep in enemy held territory, recruiting people to fight the Nazi menace. They both paid the ultimate price, which built their legends. But their legends are not the stories of their death but the stories of their lives. More on Hanna Senesh.

Haika Grossman, 1919-1996
She was a partisan, a legislator and a civil rights activist, a warrior for good in the full sense of the word. 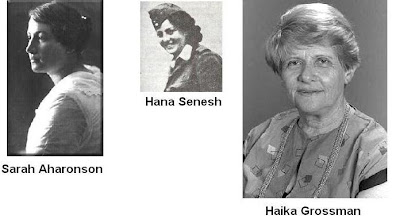 The soul of a nation and its culture is in its authors, poets and singers, weaving their words and rhythms into an intense experience of been and living. And women made their mark on it just like men. 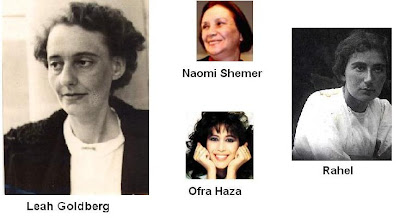 She is a major pillar of The Modern Hebrew literature.

She is Israel’s most famous poet and lyricist.

Known as Rahel Hameshoreret (Rahel the poet), her words touch heart and soul of everyone who reads, sings or just listens to her poem.

A captivating singer and actress, the tragic end of her life did not overshadow a glamorous career, filled with upbeat songs.

From among the pioneers who carried the burden of creating Israel out of the destitution of the people and the land these women stand tall: Manya Shohat, 1880-1961, a pioneer, a revolutionary, a guard and a negotiator; and her friend Rahel Yanait Ben Zvi, 1886-1979, the wife of Israel’s second president Yizhak Ben Tvi, and a counsel to the younger generations.. 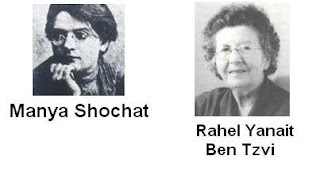 Other preeminent figures from history and society 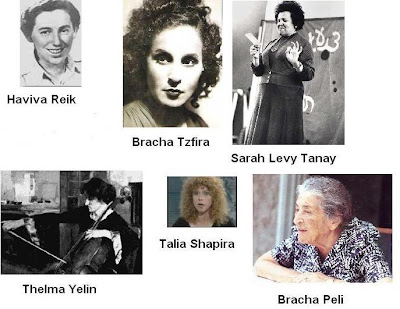 Like Hannah Senesh she volunteered to fight the Nazis, deep behind enemy lines, where the odds were against them. She was eventually caught and executed, “every day that we remain alive is a gift from the heavens” she said about their chances, yet she went on.

Sarah Levy Tanay, 1911-2005
The mother of modern Israeli dance and a composer

Thelma Bentwich Yelin 1895-1959
A cellist who founded the ‘Thelma Yelin High School for the Performing Arts’, a school that has educated many of Israel’s actors, musicians and directors.

A publisher and a businesswoman.

Bracha Habas, 1900-1968
Journalist, editor and documentarian, one of the first women journalists in the land of Israel, wrote for “Davar” and edited its children supplement “Dvar Le Yeladim.”

A pioneer and a legislator in the very first years of Israel’s parliamentary life, she focused on workers’ rights and women’s rights. Her approach was that even the language of the law can’t differentiate between the genders, and every right given to men is a right given to women as well.

The price of an armed struggle

We did not choose to make this an armed struggle, the choice was made for us, and when it was made we fought. In many cases men and women fought next to each other, and fell next to each other. The following is barely a sample of the price women had paid in the course of this violent conflict.

Rahel Halevi Hadad, from the first to settle in Petach Tikvah, died 1886. Beaten to death by a looting Arab mob she tried to fend of with her bare hands that raided Petach Tikvah when most of the men went to the court in Jaffa carrying evidence of a previous Arab raid on their cattle.

From the heroes of Tel Hai 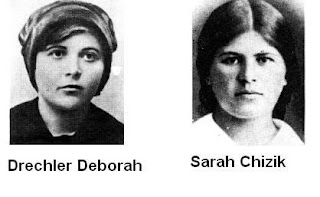 Along with Yosef Trumpeldor, 8 people died in the battle of Tel Hai, and the circumstances leading to what is considered the first battle in the history of Zionism, two of them were women.

Deborah Drechler was killed on March 1st 1920, just as the battle began. A heroine in her own right, during the First World War she helped her fellow men pioneers when they were held prison in Turkish jails, first in Nazareth then Damascus, she smuggled food to them and help them exchange letters with the outside world.

And Sarah Chizik, her fried and fellow pioneer who was killed the day after.

Latrun
Israel war of independence was demanding and costly from everyone. 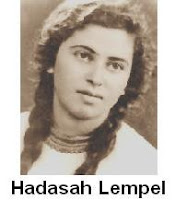 During the second battle over the Latrun police station in late May 1948, Hadassah Lempel Halenia was the radio technician in the armored vehicle that broke into that fortified garrison. Her death from heavy enemy fire was recorded in the film “Cast a Giant Shadow.” She was a gifted painter. 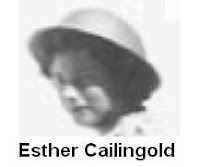 She was a member of an affluent Jewish family from England. She volunteered to help her people and the state of Israel following the horrors of the holocaust. Helped Jews immigrate to the land of Israel against the British blockade. In Jerusalem she was a teacher. She was killed while defending heroically the Jewish Quarter of the Old City of Jerusalem. 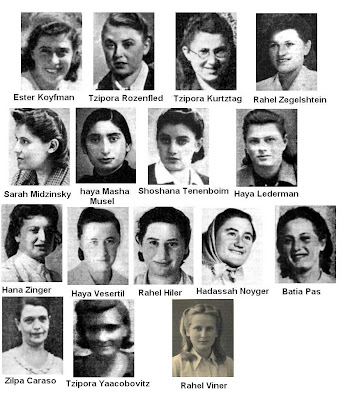 Most of them holocaust survivors that have been through the death camps, a few came to Israel in the middle of WW2 in what was called “Teheran children.” They were all members of religious Zionists movements.

Sergeant 1stclass Keren Tendler, 1979-2006, a helicopter flight mechanic in ‘The Second Lebanon War’. Killed when her helicopter was shot down by enemy fire.

This list is by no means complete, but it is more then enough to show that in a society considered chauvinistic and patriarchal, women had made an important and impressive mark, even more so when we look at present day Israel.