What all the following people have in common?
Angelo Frammartino,
Ziva Goldovsky,
Mavis pat,
And Dr. Levi Billig,
A young Italian, an Israeli teenager, a 46 years old American nurse, and a British burn Israeli Orientalist? They all lived in different periods but their lives ended the same way, they were murdered by Palestinians; by people they tried to reach and help.
24 years old Angelo Frammartino was a human rights activist working with Palestinian children in East Jerusalem; a Palestinian named Ashraf Hanaisha stabbed him to death on August 10th 2006; apparently he mistook him for a Jew.
Ziva Goldovsky was an 18 years Old Russian burn Israeli peace activist who was murdered by a Palestinian terrorist, a friend of her Palestinian boyfriend, On August 10th 1988.
Mavis Pat was a 46 years old American nurse working in Gaza Baptist Hospital. She was murdered on the 15th of January 1972 by a grenade thrown into a car driven by her employer, hospital manager Reverend Edward Nicolas, who was wounded from submachine gun fire during that attack, along with one of his three kids that were in the car with them (All Americans).
Dr. Levi Billig, 39, was murdered in his home apartment in the neighborhood of Talpiot in Jerusalem by a Palestinian sniper on August 21st 1936. He was one of the leading names in the ‘Brit Shalom’ peace association, and his death is considered to be the point in time when this group ceased to be a factor of any importance in Zionist politics.
Their tragic death is more of an indicator of the shortcoming of the peace movement then it is of Palestinian brutality, which has plenty of indicators from other chapters of the protracted Israeli Palestinian conflict; because in the history of the peace movement they are all in a special pantheon, The Pantheon of oblivion.

Angelo Frammartino is still remembered somewhere on the web, because his death was relatively recent, but as Calev Ben David had pointed out it is very little, faintly little, when compared to all the effort been made to sanctify Rachel Corrie.
Ziva Goldovsky was forgotten almost immediately after her murder. During the first days after her murder, and the investigation that followed, left wing newspapers in Israel, Haaretz, Davar, and Al Hamishmar, dealt heavily with the story, but as the shock subsided, she vanished from memory, only to be mention occasionally by far right Jews who drooled over her death the way Max Blumenthal does in his frame jobs.
On the Mavis Pat story I run by accident, while going through old newspaper looking for something completely different, and I’m probably misspelling her name. All I know is this, had she lived she could have been by now someone’s grandma and great grandma.

Tragic though their stories are, in the greater story of the Israeli Palestinian conflict they were barely a footnote, partially because no one made an effort to remember them, (only recently the family of Ziva Goldovsky opened a web site commemorating 20 years to her death), and partially because they did not affect the course of history. But when it comes to the story Dr. Levi Billig, it is not about sidelining a personal tragedy but about editing out nearly an entire chapter of history, the chapter of ‘Brit Shalom’ and its era.

‘Brit Shalom’ was a political association founded in 1926 in Jerusalem by leading Jewish thinkers, scholars and political activists, see here; its declared purpose was “To pave a road and an understanding between Hebrews and Arabs towards common forms of life in the land of Israel. By way of complete equality of the political rights of both nations with wide autonomy.” In 1930 they advocated a bi national state. And some of its members were even willing to limit Jewish immigration.

The concession they offered were difficult to a lot of Jews to accept because they were regarded as a deep cut in the core Zionist beliefs and aspirations, and in the Arabs side there was no response, just a few second level personalities willing to listen. But what devastated this movement the most was Arab terrorism. The riots of 1936 claimed the lives of dozens of Jews mostly civilians, and one political casualty - ‘Brit Shalom’.

To clarify, these were heinous atrocities. In the first two days of the riots, April 19 & 20, more then 20 Jews where murdered by Arab mob, mostly in Tel Aviv and its vicinity but also in Jerusalem and Haifa. They were stoned, knifed, beaten or shot to death; any means available was used. This was followed by a wave of refugees, as hundreds of Jews fled from Jaffa to Tel Aviv and from mixed neighborhoods in Jerusalem and Haifa into those with dominate Jewish population. Afterwards, nearly everyday at least one Jew was murdered, often several. The attacks were all over the land, the victims were men, women, children and the elderly, Ultra Orthodox Jews who then were strong anti Zionists, and secular Jews, European Jews and non European Jews, some were born in the land, some have been there for many years and others only recently arrived.
During the days leading to Billig’s murder evil was very concentrated, but not much different then what had happened before and after. On the 27th of July two Palestinians above the age of twenty, throw a bomb at a crowd of Yemenite children as they left for home from their Talmud Torah, religious school, in Tel Aviv.
Six children were hurt: Shimon Ashkenazi age 9, Amram Yitzhak age 11, Cohen Yekhiel aged 9, Shmuel Barkhiel age 11, David Shubri age 8, and Immanuel Cohen.
The perpetrators escaped a police chase with the help of a mob from the Arab village of Menashia that violently kept the police from arresting them. Even though no one was killed the horror from such monstrosity sent shock waves throughout the Jewish community in the land of Israel.
On August the 13th most members of the Aunger family from Safed were killed when a bomb was thrown into their home, the father, Alther was 36, his son Avraham 6, the daughters Hava and Yafa were 7 and 9. Two days later several workers were killed in an ambush in the Carmel Forest. The next day 8 years old David Albalah was killed by a bomb thrown from a train passing through Hertzl Street in Tel Aviv. And on the 17 that month the nurses Martha Fink and Nehama Tzedek were gunned down in front of the Government Hospital in Jaffa were they worked, taking care of Arab patients.
In face of such constant atrocities ‘Brit Shalom’ deep cut concession looked more and more unattainable, unrealistic and unappealing. It also affected its membership eroding it more and more. The final blow came on the 21st of August, when the Palestinian murder campaign hit home and hit hard. Dr. Levi Billig was not just a gifted man and a committed Orientalist, he was also a very liked individual with Jewish, Arabs and British friends as indicated by the eulogies given by his friends Dr. Shlomo Dov Goitein and Dr. Yehuda Magnes at his funeral, two men who shared his dreams and visions. 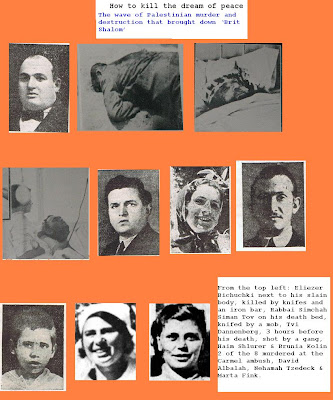 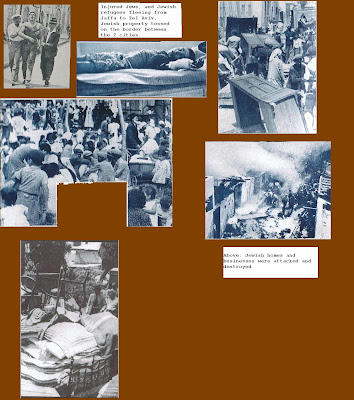 This murder turned ‘Brit Shalom’ from a marginal group to whatever definition there is for something that is less then that. But the eulogy for the movement and its ideas came two month earlier by one of its founders and former member Arthur Rupin, who said on May 16: “The peace will not be established in this land by an ‘agreement’ with the Arabs, rather it will come in due time, when we are strong enough so the Arabs will not be so certain in the results of the struggle and be forced to accept us as an existing fact.”

Now, how much different is that from what Zeev Jabotinsky had said 13 years earlier in his famous “About The Iron Wall” essay?
Not much different at all, and that is the whole point.
Because what the peace movement had edited out here, was not just a chapter in history, nor the conclusion that the other side was right, a frightening one to any hard line dogmatic ideologue, but one that he can still dispute if he insists (or she). But the mere possibility that the other side was right; dogmatism in its worse form is about certainties, absolute and total, everything has been written in advance and the possibility of error is non existence, worse then that, it is incomprehensible. From there picking and choosing from history what is ideologically convenient is not very far, it is almost unavoidable. But whatever the motives are, picking and choosing from history will always be dishonest, just as when one victim of violence, Rachel Corry, is more cherished then the others, only this time it has a moral price tag. And that price tag includes the morality and credibility of people that are not just peace activists but also peace monopolists. 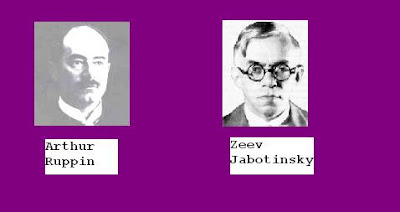 Correction: in my first post about ‘Brit Tzedeck v’Shalom’ I had mention Dr. Yehuda Magnes as one of the founders of ‘Brit Shalom’, that was a mistake on my part. Dr. Magnes was associated with this group through the Hebrew University, which he headed and many of the founders of ‘Brit Shalom’ worked at, and by the similarity of their views. But he was never a member; as far as he was concerned they were not moderate enough.
I thank those who had corrected me.
Posted by Dvar Dea at 6:58 PM