Palestinian propaganda: When honesty slips out

Palestinian propaganda long ago reached impressive levels of sophistication and fabrication. Arguing for the delegitimation of one nation, an act that contradicts the core values of liberal progressive societies, while pretending to be a national liberation movement with social liberal progressive values, is quite a feat. And when we see the automatic trust their propagandists enjoy from the mainstream media and left-leaning intelligentsia including Jews, this success is very impressive. But sometimes their true intentions and their supremacist view of the world make their way to the surface as a result of their own words and actions. This is the case with their set of maps below, which appears in many of their demonstrations and websites, but only recently caught the attention of the pro-Israel blogosphere.

The four maps below are supposed to represent Zionist lust for Arab lands. As usual with Palestinian propaganda, it has its omissions.  For example, the map showing Israel giving up the oil-rich Sinai Peninsula in exchange for peace in 1979 is missing. While it does have its falsehoods, as pointed out by Jeffrey Goldberg, Adam Holland, and at Zionism-Israel, when they debunked misguided convictions held by pro-Palestinian activists; this set of maps does portray a genuine feeling of loss, one that comes from losing actual property that was in the possession of the Arab world prior to the formation of the state of Israel. However this property was not land, land was just the means by which this property was lost: 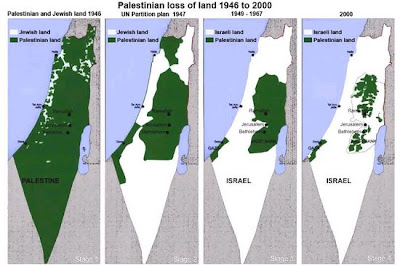 The first map, on the left, that of 1946, represents the ultimate sin, Jews aspiring for life of liberty, already taking significant steps toward that goal on land bought and paid for with hard currency and earned by blood and sweat.

The second map is the ultimate outrage; the world acknowledges that Jews are their own property, free to have a land, a country and a will of their own, like all nations on earth. Today the Palestinian propagandists say they couldn’t have accepted the partition offer of 1947 because the Jews got 55%. However, when the Peel proposal of 1937 offered only 17% to the Jews, the Arabs violently rejected it. Why? Because it was not about land, it was about the use of that land. To the Palestinian propagandist, a free Jewish society on any portion of the land of Israel, even with zero Arab population, is something to be totally rejected. 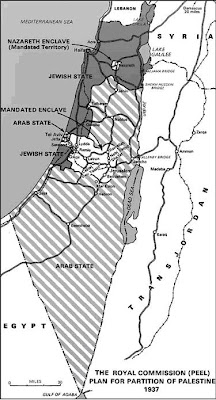 The third map is the ultimate crime: A free Jewish state and free Jewish people as a fact of life, of everyday reality. The fact that in that alleged abomination Arabs do own land, privately and through organizations such as the Islamic Waqf and the Greek Orthodox Church, is not surprisingly omitted, along with the fact that in the Arab world, then and now, Jews are not allowed to own land. And prior to 1967 those lands were not Palestinian; they were Jordanian and Egyptian.

The fourth map, which is vaguely based on the phases of the Oslo peace process, has its own set of omissions, and quite a list of them:

It omits so much one has to wonder what the little green enclaves in the last map really represent, after all their connection to reality is more tenuous than any of the other maps?

Is it possible that their size is a metaphor for the propagandists’ own lack of confidence in their own beliefs and arguments, and that in spite of their successful deception they fear reality and morality will close in on them, exposing their lies and delusions?

Know this, even the most successfully sold fabrication has a major flaw, it is a fraud based on a lie. And as such it will always fear exposure, and that fear will be its downfall. And it is up to us, the ‘stolen’ property that gained its liberty by owning land legally and becoming a sovereign nation like most of the nations on this earth, to catch it.